The first two weeks of Labyrinth Ontario’s inaugural season offered attendees an immense wealth of practical insights into the technique and craft modal music, inspiring performances, and valuable lore and wisdom regarding the larger context of contemporary modal cultures, straight from the source of some of the most important representative artists.

In addition to the first the two rounds of intensive workshops, we were graced with the levitating concert performances of This Tale of Ours (Ross Daly, Kelly Thoma, Araz Salak and Pedram Khavarzamini), Imamyar Huseynov, and Ali Akbar Moradi, along with a highly informative panel discussion on creative processes across cultures. Each of these events was rewarding in itself, but their total impact as a ‘package’ brought rare and remarkable insights into the present state of modal music making. Toronto’s Danforth and Chester neighbourhood is quite likely the modal musical centre of the planet for the month of May!

While there was much great music making going on, I was particularly struck by the reminder that true mastery goes beyond playing to knowing what really matters on a deeper cultural, aesthetic, and ultimately spiritual level with this music—and being it, living it. While there are many musicians who play fantastically, this total mastery of musical ability, knowledge and rooted sense of purpose is indeed rare.

Our panel discussion on May 10 included seminar leaders Ross Daly (composition) and Kelly Thoma (lyra), along with local modal music veterans Ernie Tollar (flutes/saxophone) and Maryem Tollar (vocals), and an Iranian scholar and performer of Turkish music, Sanaz Nakhjavani (kanun). The evening was intimate but the audience very attentive and included the local Member of Parliament, Ms. Julie Dabrusin. Together the panel represented many decades of collective and extremely varied creative experience, and the discussion brought up many interesting insights. You can catch the whole discussion on video at the top of this post, or here: www.youtube.com/watch?v=X_JBoFZV9ZA

Ross Daly has long been not only a brilliant performer and catalyst for various musical collaborations (not the least being the original Labyrinth centre in Crete, after which Labyrinth Ontario is modelled), but also the most eloquent and original voice for articulating the deeper meaning of contemporary modal music. He is a wise breath of fresh air—indeed a large, open, well-placed balcony door—amidst the often stuffy and detached officialdom of ethnomusicologists focusing on this music. As you can see for yourself in the video, he offers refreshing and thought-provoking perspectives on all the topics we discussed. These ranged from the relationship of individuals to tradition, the effect of recordings on learning and performing, the balance of study and intuitive creativity, aesthetic preferences, the dynamics of audiences, the role of ‘cultural outsiders’ (on which Kelly Thoma and Maryem Tollar brought up some particularly remarkable points), and building a repertoire, among other things.

Ali Akbar Moradi’s workshop centred on very specific aspects of Kurdish tanbur technique and repertoire, but likewise included many profound insights into the tanbur tradition, as well as musicality in general and the fascinating dynamics of how this music, which was essentially secret and restricted to a very small community (the Yarsan), became a global phenomenon. Moradi devoted his life to meticulously collecting fragments of repertoire and style from various masters and arranging them into a large and coherent repertoire. In doing this he is a contemporary parallel to the 18th-century Zen monk Kinko Kurosawa, who assembled the famous solo repertoire (honkyoku) of the Japanese shakuhachi flute. The Persian radif repertoire has a similar origin with the Farahani family in the late 19th-early 20th century. Moradi’s contribution to the tanbur is equally significant to these great masters. It is all the more remarkable that, due to various political elements, he took courageous personal risks in opening up this music to the world. We are all the richer for that.

Aside from his powerful musicianship and authority within the tanbur tradition, Moradi radiated the grace and wisdom of a complete master (Ostad in Persian). An inspiring humanist, his open mind, warm heart, down-to-earth frankness and cheeky sense of humour were an essential and impressive part of his transmission in the seminar, perfectly complementing his technical micromanaging.

To have these amazing and profound musical encounters here in Toronto is an inspiring sign of the times. And a glorious counterbalance to the darker side of our contemporary madness. 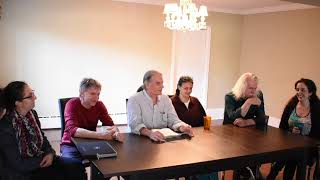